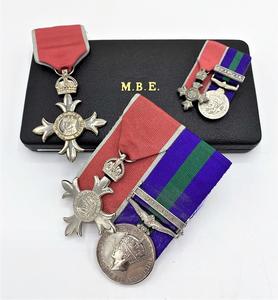 On the 04th of March 2021 we had the opportunity to sell an MBE which was awarded to Alan Booth in 2005 for his 31 years of service as Scarborough Town Crier.

An RAF veteran, he auditioned for the position of Town Crier after his return to the UK in 1968. Alan was a well-known ambassador for Scarborough with his work taking him across the world to promote the historical sea-side town.

The MBE (Lot 80), associated certification, and other medals including his Malayan Campaign medal and Freedom of the Borough of Scarborough Certificate in its silver presentation case were sold for £1350 + fees to a buyer with local interest.